You know that feeling when you walk into a room and you just know you’re out of your depth? And worse, everybody else there clearly can tell that you don’t belong there?

That’s how I felt on the first day of official training at U.S. Nationals in Anchorage, AK last week.

I was cruising around on my skate skis, previewing the course by myself. Most regional and national race circuits have what is called “official training” during a specific period of time the day before the race. On Tuesday, January 2, 400 athletes, coaches, and wax techs swarmed the venue starting at 10 a.m. to inspect the next day’s race course and put together any last-minute plans for race strategy. Everywhere I turned I saw packs of skiers sporting team uniforms, individual athletes discussing tactics with a coach, and wax techs comparing notes on which skis and waxes were running fastest.

As I took in the details of the 2.5k loop of man-made snow, I was making mental notes of how I wanted to race it the next day. I was to ski 4 loops, for a 10k interval-start skate race. I knew I wanted to take the first lap conservatively, but I also knew there would already be a lot of fast skiers on course when I started. I knew drafting them would be to my advantage. There were a couple tricky downhill corners, but after a couple runs through them I was confident I could ski them aggressively without sailing off the course and into the trees. There was one steep uphill that was deep with sugary snow. There would be no use pushing too hard up that thing…

In other words, I knew what I was doing. I knew I was capable. I’ve raced dozens of 10k interval start skate races. It’s one of my favorite races, actually.

To say it simply, I felt like I did not belong there at all. I have no team. No teammates. I was wearing an old U.S. Biathlon vest from World Junior Championships. Last year I duct taped over the USBA logo on the back and wrote, “Endurance Efficacy”, mostly to stop people asking me if I was on the U.S. Biathlon team. I left the venue that morning trying to pull myself together.

The last time I had raced at Nationals was 2014. Nationals 2015 was taken out by illness, in 2016 I was working at Alta Ski Area and having an Athletic Identity Crisis, and last year I was doing my Solo-Season, racing Eastern Cups in New England. Though I knew I was ready to be back in an elite environment, the shock of seeing so many national-class athletes all in one place rattled me. And all of them looked the part so much more than I did.

When my dad and I used to travel and race together when I was in high school, I often felt this Imposter Syndrome. Then I discovered that everybody feels intimidated sometimes, and that the athletes who are going to excel are the ones that are having fun, no matter what pressure might be on them. I have experience in being the underdog, the oddball, the misfit. It’s an identity I’m quite comfortable in, really. All I needed to do was race. I knew why I was there.

We had four races in a six day period, which is, needless to say, a lot of racing. And more than a little tiring. We kicked things off with the skate interval start, 10k for women and 15k for men. It was snowing hard, and still dark at my start shortly after 10 a.m. As I left the start gate I caught a ride with a couple athletes who were starting their second lap on the four-lap course. Throughout the race I was pleased to be able to keep pace with a number of athletes whom I knew would finish high in the field. But I faded hard in my last lap, and was somewhat disappointed with my result. It was, as my dad and I have always said, a ‘solid’ race. But nothing special.

Still, nothing to sneeze at, and with a solid race under my belt I was excited to push on to the skate sprints on Friday. In sprint racing, everybody skis an individual-start qualifying round in the morning. The top 30 racers move on to the heats in the afternoon. The women’s course is 1.4k, men’s 1.6k. I missed qualifying by a handful of seconds (a lot in a sprint) and went home early, again a bit disappointed, but not too shocked. After all, I’d never qualified for the senior heats at Nationals.

On Sunday, things started to take an upward turn. The race was a classic mass start, 20k for women, 30k for men. Above all, I would say it was a well-executed race. I had a strategy, I stuck to it despite the inevitable shake-ups that come during a race, and I felt mentally and physically strong throughout. (I also had incredible skis, courtesy of my wax tech Erik Mundhal.) I was even lucky enough to enjoy the excitement of a sprint-finish! I placed 18th, for a new personal-best at Nationals. 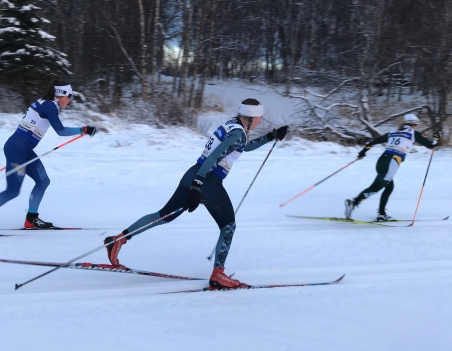 I’m in the foreground 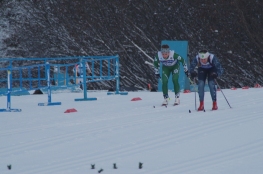 That left only the classic sprints. I qualified in 22nd, with a few seconds to spare! In the first round of heats, the quarterfinals, the top two finishers advance to the semi-finals, and I knew it was unlikely I would advance. I was ranked fifth out of six in my quarterfinal, and knew that the top two or three athletes would be out of my reach. That’s how it is at Nationals: For most of us, there are at least a dozen athletes there who are in another league. I finished fourth in my quarterfinal, moving up to 20th in overall results, and solidifying my satisfaction with the week. 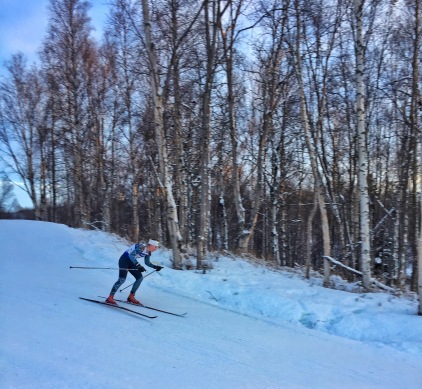 Start of my quarterfinal

Going into Nationals, I had no idea what to expect. I really had no goals, not having raced on a National level in four years. It’s pretty disconcerting to go into a race having no clue where I’m going to finish. Should I hope for 40th? 20th?

I also had some unexpected demons to deal with in the form of Imposter Syndrome. Though I know why I’m racing, and am confident that I’m so much happier as a ski racer now than I ever was in my past, I had to work hard at the beginning of the week to remember that. Thankfully I had the support of one of my best friends, who not only came out to cheer for me every day, but hosted me at her house for two weeks and shuttled me to and from the venue every day. She even put on a coach’s bib for the classic 20k, allowing her access to the course to hold my spare poles (in case I broke one, which happens more commonly in mass starts) and offer me a drink at the halfway point of the 65-minute race.

Most of all, she offered me the moral support that I needed to get through the week. As did so many of you, my readers. Thank you so much for your generous enthusiasm. It meant a lot to know that friends are excited about what I am doing.

I now have a baseline idea of how fast I’m skiing, and can set goals from there. My next races will be the upcoming Super Tour stop in Craftsbury, VT. The field will be smaller than that at Nationals, but many of the top-ranked athletes will still be there. Most post-collegiate athletes not racing on the World Cup or some other European circuit race the Super Tours, so I expect some more stiff competition throughout the rest of the season.

The races in Craftsbury will be on Jan 26th and 28th. They are a classic sprint and a skate 5k. My goal is to make it past the quarterfinals to the semi-finals in the sprints, and a top-15 finish in the 5k skate. Stay tuned…we shall see!

I am currently in Jackson, WY, decompressing a bit after Nationals, visiting friends, and squeezing in a few extra days of altitude training before heading east. I will be stopping in Bend (my current home base) only briefly before hopping on a flight to Boston. It’s a little bit of a crazy schedule, but I’m loving it so far.

If you want to see me race at any point throughout the season, send me a message and I’ll send you the details!

If you want to join my friends and supporters who have contributed to my fundraising, you can still do so here. Many post-collegiate skiers, (though they may receive financial support from their teams), fund their seasons at least partially by themselves, by working, fundraising, and pursuing individual sponsors. I am pulling this season together on a shoestring budget, and it’s only possible through the help of friends who are hosting me along the  way, supporters who contribute to my fundraising efforts, and my personal sponsors. Thank you so much to all of these individuals and companies. You make the dream possible.

Interested in working with me? I am psyched to be coaching endurance athletes, designing training plans and helping others excel at their sport. I also offer lifestyle design consultation, for all those free spirits out there who want to do something unconventional with their life but aren’t sure exactly how to make it happen.

Hope to see some of you out on the trails! Until then, stay tuned, join the email list if you haven’t already, and stay in touch!

"Remember, you're moving barely faster than a tree."
The tick bite happened in April 2017, but that was just one piece.
The most beautiful city in the world this week was Portland, Oregon.
Moving heavy things in my heart this week.
The urge to jump: anyone feel this when standing on an edge??
Signs of life