Travel and Training (Traveling on a train?)

Anybody else on the go for the Holidays?

I’ve been traveling for the past couple weeks (I’m writing from Switzerland) and this gives me a great opportunity to talk about traveling and training!

First off, my 3-week journey is of dual nature: The first part was primarily a non-training trip. The second part is a true endurance adventure! In this post I’ll be sharing with you some tips on how to train when you’re on vacation, as well as what it’s like to take a vacation centered around training! And maybe a special bonus about train-travel. Yes, actual trains.

So I started my journey in Prague, Czech Republic. I was there for 8 days, to see an old friend and explore the city. The buildings in Prague are several hundred years older than anything my young American eyes have ever seen, and it’s no exaggeration to say I walked around with my eyes and mouth wide open, bumping into strangers like a typical tourist.

Below: The clock tower at Old Town Square, A canal, and St Vitus Cathedral 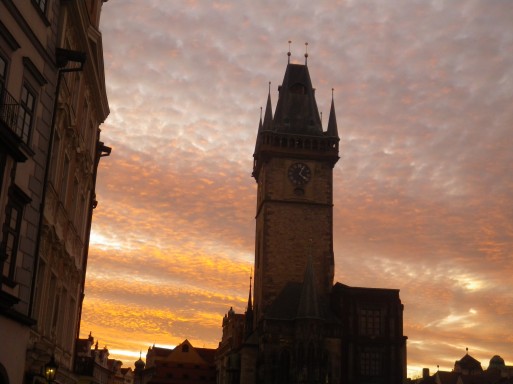 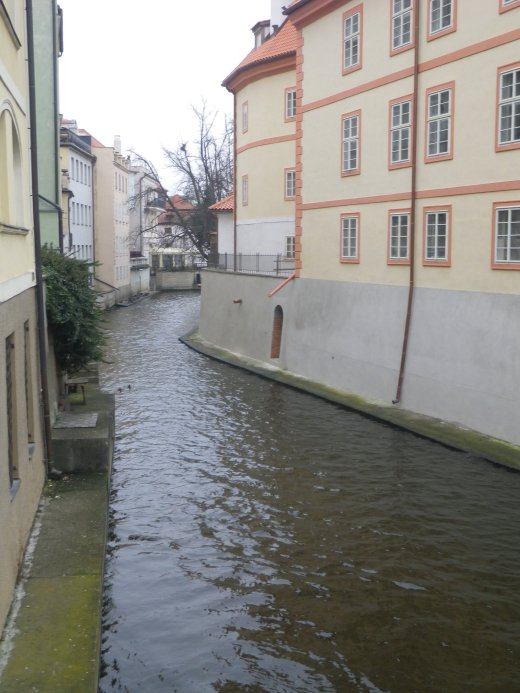 The primary aim of my trip was to do just that: be a tourist. I learned a lot about public transit (I don’t really get public transit…so learning to navigate the trains was the #1 accomplishment of this week! City dwellers may already know this, but for country kids like me let me just tell you, the system of trains, trams, metros and buses that crisscross Prague allowed me to get absolutely anywhere I wanted to go, all without understanding the language. Super satisfying!) I danced to live folk music, bought a hot chocolate for a homeless man, spoke (very) limited Czech with strangers, and attended several Christmas festivals and performances.

But I also have a race season approaching.

My races begin rather later this year than in previous Nordic seasons, without the goal of qualifying for any team, trips, or future races, but still, December is not a time when I want to take a week off from training. However, extraordinary as it is in the realm of Gothic churches and traditional Christmas festivities, Prague is mildly deficient in good training options.

For example, I didn’t ski all week.

I also wanted to have energy to be out adventuring like a tourist, not recovering from hard workouts.

My advice to anyone who is traveling while maintaining a training schedule: Ask yourself the following questions.

These simple questions gave me the framework I needed to plan my week. Here is what I did.

The week leading up to my week in Prague included two hard interval sessions, with a day off right before flying. I wanted to go into my travel day reasonably rested; you don’t want to purposely lower your resistance to illness right before subjecting yourself to elevated stress and an airplane full of strangers! But at the same time, you begin to lose capillary and mitochondrial adaptation within 7 (7!) days after building it, meaning I didn’t want to take too much time off from intervals.

So I arrived in Prague, took and additional 2 days off from training, then eased back into things with a light strength workout and jog. Strength workouts on the go can be interesting. I’m a fan of living-room strength workouts (gyms are expensive, yo!) and you’d be amazed what you can do with a set of dumbbells and a chair. But still, I didn’t fly across the ocean with my dumbbells. Strength workouts for my week in Prague were entirely body-weight circuits. In my opinion, this is fine. A week or two of changing up my strength routine generally leaves me feeling refreshed when I return to the normal program.

The following day I did intervals, 6 days after my last set, and 5 days before my next set would be. They were running intervals, which is not the absolute best thing I can do to prepare for a ski race, but it got my heart and lungs working at that capacity again, and limited capillary loss. Turns out if you look around, there are trails to be had, both within Prague and on the outskirts. One of the trails pictured below was recommended by a friend, the other I found while out on an exploratory urban jog: 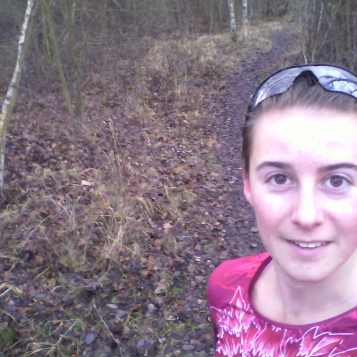 The point is, get out there and have a look! Ask some questions. Sure, I got funny looks, and I was the only athlete I saw out there, but hey, if you’re an endurance athlete you already know you’re a rare breed!

On another note for my female friends out there, it is worth noting that both of these trails are quite close to civilization, even though they look nice and secluded, and that I traveled them by daylight only. Take to unfamiliar trails with a friend if possible, always ask a local about the safety of surrounding areas, and consider carrying something for self defense; pepper spray, or at the very least, your cell phone.

And now, onto the next, and very exciting Endurance Adventure leg of my journey!

Thanks to the generosity of my good friend and Dartmouth teammate Meg and her family, I’m currently in Davos, Switzerland, skiing at a premier World Cup venue! I’m in Switzerland for a total of 11 days, and this constitutes my first week on snow and a time of high training volume and intensity, before my pre-season taper. This week both my hours and the number of intensity sessions are higher than normal, and when I return to the States next week I will take a rest week before races begin in January. Saturday was my first day on skis, and Sunday was my first race!

In previous seasons, early-season races have been critical for qualifying for later-season opportunities. But this year is different. As an independent and unattached athlete, my race goals this year are entirely my own, and my primary goal is to see how fast I can ski at varying distances, having prepared for the season nearly entirely under my own guidance. My goal races are spread over two weekends in February.

And so I happily raced on Sunday having had only one day on snow, on race skis sans fluoro powder (for non skiers, that’s basically magic powder than makes your skis faster,) after having spent over a week training at half capacity. Funny enough, the race Meg and I joined in was an OPA Cup; a very high level European race circuit. We were competing with athletes who have skied on the World Cup, or are trying to make their country’s team. We were a bit of a joke. But hey, doesn’t it look like we’re having a blast? (We are!) 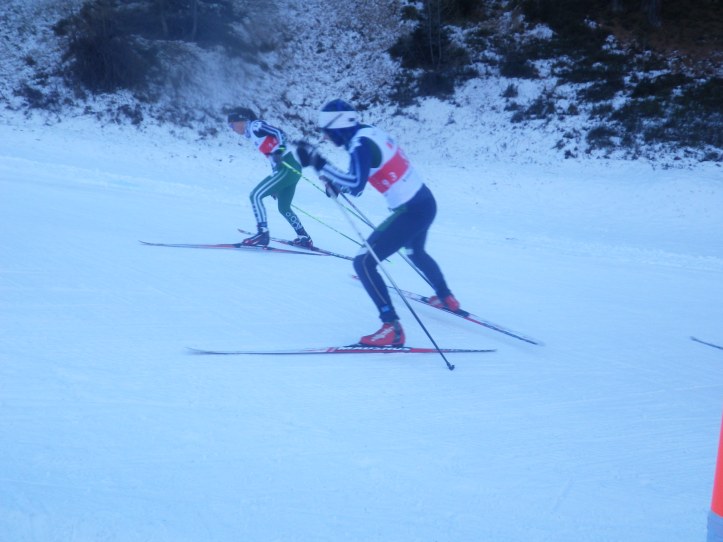 That’s me in the forefront.

Now we’re settled in Davos. Today I had access to a gym, and was able to hit the weights again, feeling strong after my 10-day break. We also got out on snow this morning for an easy 2 hour classic ski (my first classic ski of the season!) Though there is little natural snow here, the wonderful groomers are working incredibly hard to put together a solid 7k loop of high quality man made snow. In spite of the discouragingly un-wintery weather, it’s still hard to complain. 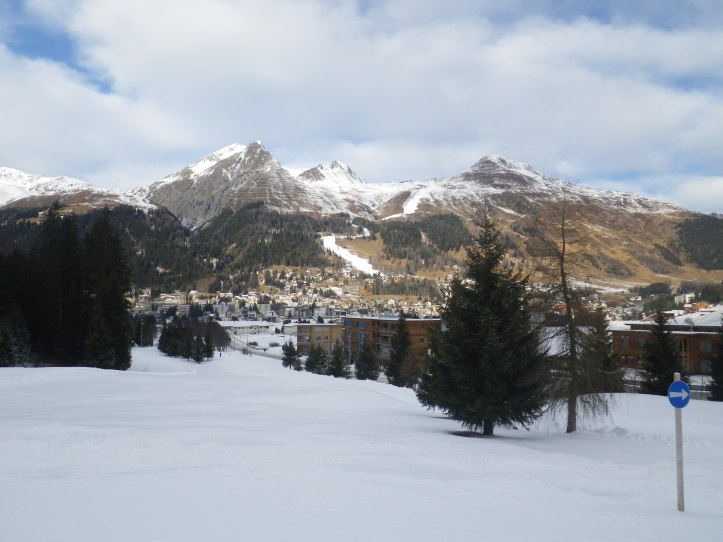 Each day this week will be a double workout day, except for my off day, which is Friday. Otherwise, over an 8 day period, I am enjoying:

It’s great to be back with an old teammate, in the presence of athletes of the highest caliber from all over Europe. Even though it is mildly painful, in that it calls for me to examine the choices I have made and am making in regards to my own ski career. (Watch for a post in the near future that explores this question in more depth.)

For now, I’m here in beautiful Switzerland with my nordie friends. I feel like I’m home.

A few weeks ago, I had the opportunity to go to the mountains.
And other odd "compliments" I have received as a person with an invisible chronic illness.
Omg these two 💚
... in which we discuss my ongoing healing process (and a strategy for anyone who is going through something BIG right now,) and a surprising drawback of the digital nomad dream.
Always a great day when I get to watch @phoebzzco race!
Last week I shared big news: the story of my chronic ill-health since developing Over-Training Syndrome in 2018.